Our next adventure has begun after spending some quality time back in the States.

I had only been to Turkey once before on a day stop as part of our Honeymoon cruise several years ago.  We stopped at Kusadasi and went to the ancient city of Ephesus.  I honestly thought it was going to be my least favorite stop of the cruise, and it ended up being my favorite.  The people were so friendly.  The weather was perfect.  The scenery was gorgeous. Plus, it wasn’t overwhelmingly crowded.

Never would I have imagined that a handful of years later we would be going back to Turkey.  This time to Istanbul.  And this time to live there!

After having the experience of moving to and living in China, I felt well-prepared to head to Turkey.  This time around I knew what to expect with moving out, traveling with two dogs and adjusting to a new area.  However, even with previous experience, there is always the unknown with it being a new city and a new culture. And as exciting as it is to move to a new country, it still is sad to leave family and friends behind again.

The most stressful part about moving is traveling with dogs. 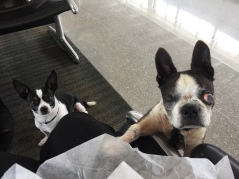 Our two small dogs did great with our moves to and from China.  Even though the flights to/from China were super long (~13 hours), they were direct and they were big planes, so that meant the dogs got to have bigger carriers in cabin with us.  For our trip to Turkey, we unfortunately had to do a layover in Frankfurt before arriving to Istanbul.  We also had to be on smaller planes, which meant smaller carriers.  I don’t think this time around was as comfortable for them but nevertheless, they arrived healthy and happy.

As we settled into our new home, we quickly realized that this transition was going to be easier than our last.  Maybe it’s because we’ve done it before.  Maybe it’s because of the country.  Maybe it’s a combination.  I definitely think that the gorgeous weather here helps (so glad I missed some of those 100 degree days back home!).

The exciting part of moving is experiencing a new culture and having the opportunity to travel to places we never would have imagined before.  We look forward to all the traveling we’ll do within Turkey and around other countries.

Stay tuned next week for a “first impressions” entry.

2 thoughts on “Time for Turkey!”