We tried Gubeikou for the third time recently with some friends who were visiting us and had an awesome hike!!  The first two times were great but I think this third time was my favorite-it’s the part I was trying to get to since the first time (plus, it had pretty fall colors!)! 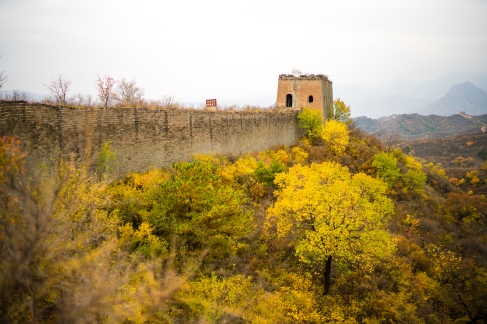 The first time we did a part of the Panlongshan section (it starts in the village of Gubeikou) but we couldn’t find much more of the Wall then so we ended up going to Jinshanling and discovering more of that during that trip.

The second time, we ended up finding the Wohushan section that we tried accessing during our first visit.  This was on the opposite side of the village.  We found this section to be very old and you have to walk on the side of the Wall for most of it. 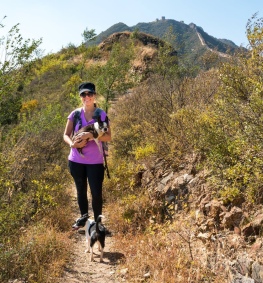 The first two times were great, and I’m glad we experienced all of that, but I especially enjoyed this last visit to Gubeikou. 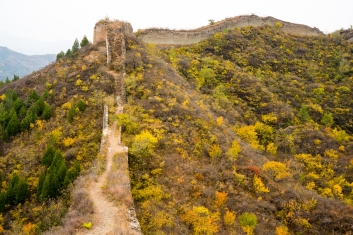 I think it started off well because we didn’t hit any traffic on the way out there.  It took us around 2 hours to get (as opposed to the 3 hours last time), so I guess leaving early (7am) really does make a difference (I just don’t like early mornings!).

Since I’ve been here two times previously, I finally knew exactly where we needed to go.  We took a right into the town towards the temples (turning right again at the end of the street).  While the streets look to be one way, I don’t think there is a set direction.  It’s fun driving through the little village, although we do get some looks.  Everyone just seems to be ambling around enjoying their day.

I found parking easily, right next to toilets that were actually nice (why didn’t I know this the previous two times?!).  After we parked, we started to get ready and it was a pretty chilly morning.  Ben got some laughs from the locals because he decided to wear shorts and a short sleeve shirt (fortunately, he did warm up during the hike).  We walked to the left behind the toilets and up to the bridge/underpass that leads up to the temple. 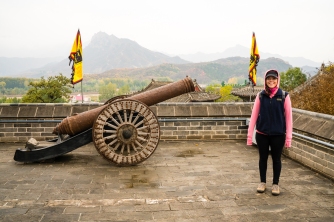 There was someone there selling tickets so we paid 25 kuai a piece (last time there was no one selling tickets, so I think it’s just when the villagers feel like working).  We got our tickets and got started.

Now, we you first start hiking, you take these stairs that have a chain link railing up to the top of the mountain.  Here you don’t see much of the Wall, so it makes you question if you’re going the right way.  We say the Wohushan section on the other side and the village below, so those were both cool views.  I knew this was the right way because I did some more research before coming out this way again. 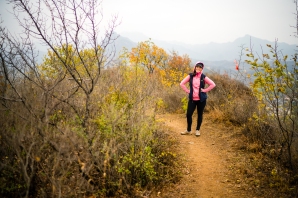 So we hiked until we got to a point where you see have to get off the path along the Wall and walk through the woods a bit to pick up the path on the Wall again.  There were pretty good markers to guide you.  We saw the goat path that we took the very first time here (we should have turned left that day and not right–who would have guessed because we could see Wall to our right that day and not to our left).

Anyways, after about 5-10 minutes we start getting the really good views of the Wall.  This was a cool part to visit.  The hiking wasn’t too strenuous (there were some ups and downs) but there were fairly flat parts too.  This part isn’t restored but you can still tell you’re on the Wall. 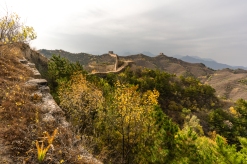 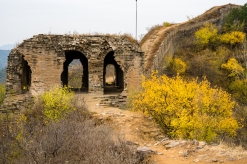 We hiked for about 6 hours total that day (about 4 hours one way–lots of photo breaks and 2 hours back).  We hiked all the way to Jinshanling which was cool.  At that point, there is a military zone, so you would have to get off the Wall to hike further. 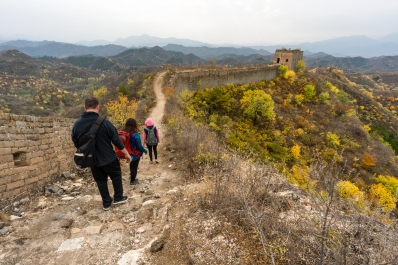 On the Way Out

Along the hike out, the group stopped for a celebratory beer and watched a photo session happening (and had our own photos taken).  Then, we saw some locals picking some berries off the trees and eating them (some of our group tried them and liked them). 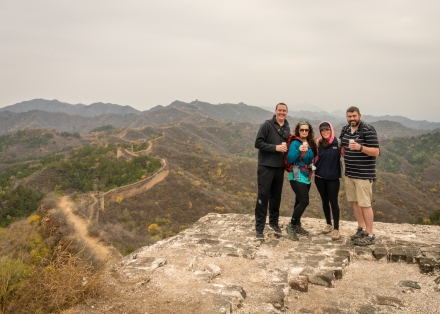 On the Way Back

As we were hiking back, some other villages were trying to sell us Wall entrance tickets halfway on the Wall.  I just told them we had them already (which we did) and we continued on.  I guess there are other places to access the Wall but I’m not sure how to get to those and I think where we parked in the village was better anyways because we got to see so much more of the Wall. 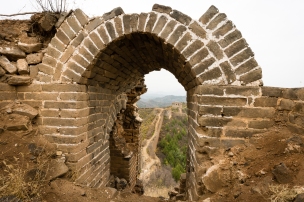 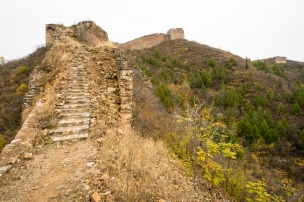 I would definitely recommend this section for people who want to get away from the crowds, see a smaller village, and not have a super strenuous hike.  Jinshanling though still ranks number 1 for me. 🙂 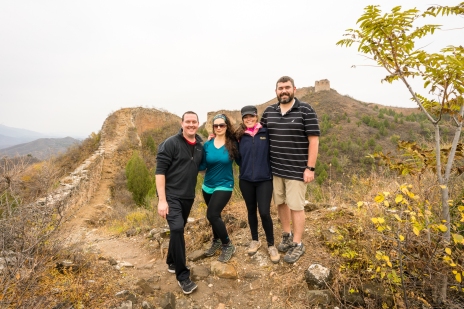 TOTE:  It’s ok to go back and do something again.  Who knows what you might experience the next time!