While here in China, I want to immerse myself in the culture and take advantage of any opportunities to do so.  So when I was invited to attend a calligraphy class, I jumped on the opportunity!  I was very excited, since this was on my to-do list (along with Tai Chi, so I hope to get to that in the future!).

We headed to the Wangfujing area for our class (Hutong Calligraphy Class) that was held in a small art gallery in a hotel. 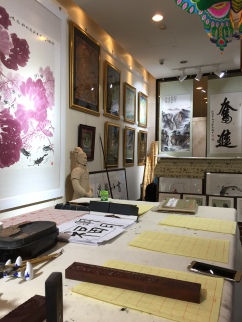 Before we had our class, we met the instructor of the class who showed us a local Chinese restaurant across the street for lunch.

We then headed to the room begin our class.  It was just the instructor and the three of us-so nice!

We began by learning the proper way to sit and hold the brush.  It’s important that your body is positioned straight.  You don’t move your body, but you move the paper.  The hand you write with is positioned on top of your other hand.  You also don’t hold your brush like a pencil, you hold it straight up.

For the strokes, this is the tricky part.  First, you don’t want too much ink on your brush and then you don’t want to press it too hard on your paper.  You put your brush down and do a slight twist and then a pull.  It is so much harder than it looks.  It definitely makes me appreciate the art that I’ve collected from here so far!

The ink is also interesting as you want the right consistency.  Water is used to dilute it if needed.

Richard showed us each time how to hold the brush, position our bodies, and get the correct amount of ink.  He showed us (many times) how to do the strokes.  He would write the strokes/characters on the top of our page for us to then try and mimick. 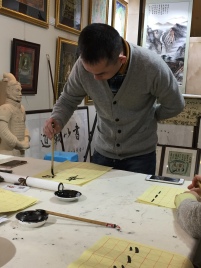 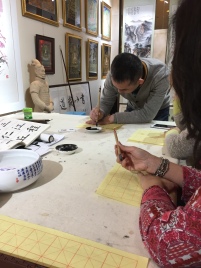 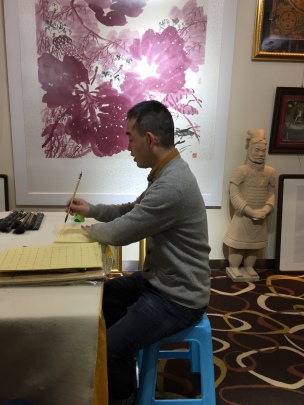 We first started by learning just a simple stroke-well, it looked simple!

To actually do the stroke the correct way took skill.  Richard told us that he began learning calligraphy at the age of 6.  He also told us that to learn some of the characters, it would take about 5 years (years!), maybe 10 to master!

We focused a good portion of this first class on one “simple” stroke.  It was tough to get that very first point to curve the correct way and not look like the Nike symbol.  I think by the end I slowly started to get it–at least a little!  We also learned how to write our names in Chinese and the characters for happiness and love.

Calligraphy is a true art.  I had no idea just how difficult it is.  When I’ve watched others do calligraphy, it looks pretty simple (sorry, I now know it’s not!).  It makes me appreciate the artwork I have collected so far.

For this class, I thought we would be learning characters and doing a bunch of writing during our first session, but we most certainly need more sessions to do that.  We definitely did a bunch of writing, it just mostly was the same stroke over and over–which I still haven’t quite perfected it!

TOTE:  Things may look simple and easy, but they’re not!